In a week where the North East got yet another military commander, we got a better look at a hobbled power sector and overburdened infrastructure. Elsewhere, while MTN gears up to enter the banks’ turf, concern over the security of Maiduguri and the country’s food import practices conjure a picture of a recently painted but creaking house.

Nigeria has named its fifth commander in two years to lead the fight against the Boko Haram insurgency due to continued attacks by Islamists. Major General Abba Dikko, who took over command of Operation Lafiya Dole in July, has been replaced by Major General Benson Akinroluyo. Since July, when Dikko was appointed, dozens of Nigerian troops have been killed in battles with militants and Islamic State West Africa Province (ISWAP) killed two abducted aid workers. 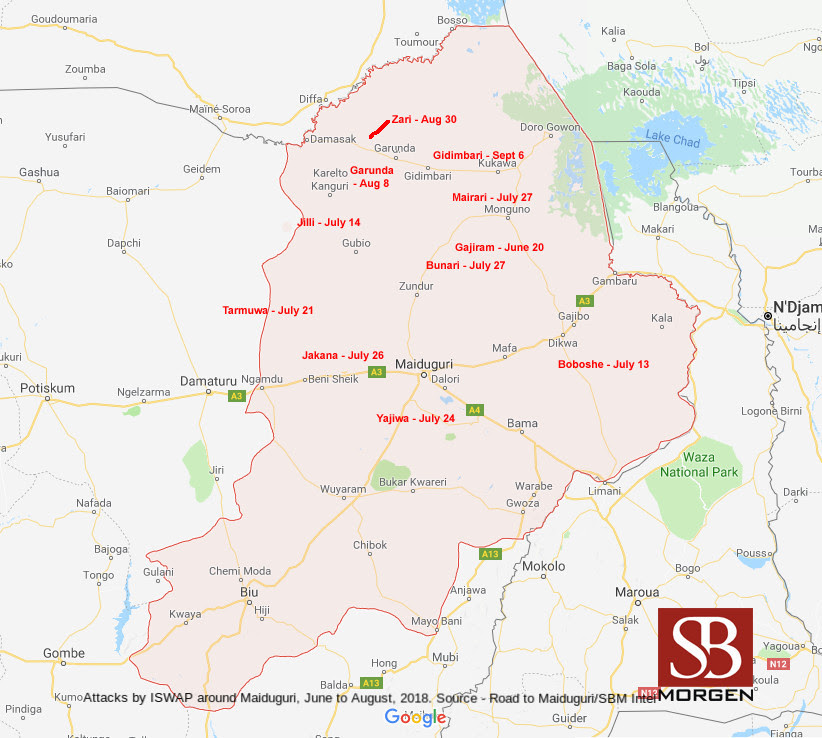 The latest reshuffle in the armed forces hierarchy which has seen a fifth commander at the helm of what is arguably the country’s primary security threat in a little over twenty-four months hints at a substantial breakdown in the leadership effort by the country’s political and military leaders in addressing this crisis. Major General Abba Dikko who took over from Major General Rogers Nicholas in July lasted barely four months in the role. Since Dikko assumed command in July, the military suffered a series of reversals in which dozens of troops have been killed in action. These casualties have come during offensives by ISWAP, the faction of insurgents led by Abu Musab al Barnawi. In the last two months, ISWAP has executed two aid workers it kidnapped. Additionally, there have been rumblings of discontent from the frontlines where troops have complained about a lack of supplies and logistical difficulties in addition to an already onerous operational environment. A combination of these factors likely rendered Dikko’s position untenable. But there remain considerable institutional debilities hampering the counterinsurgency effort, chief among them, resolving the logistical paralysis that starves troops at the front and lifting their morale. Whether the new Operation Lafiya Dole commander will be able to resolve them and reinvigorate the campaign remains to be seen.

Preserving a tenuous peace in Maiduguri

Hundreds of residents, mostly women and children, fled into Maiduguri, Borno state capital, as gunmen suspected to be Boko Haram members, attacked Judumri, a village on the outskirts of the city. Groups of men, women and children were seen flocking into the Maiduguri city centre on foot, fleeing the attack. Juddumri was attacked, as they heard heavy gunshots coming from the bush at around 6:30 pm local time on Saturday. Soldiers guarding the parapets asked everyone to leave at once. Popularly known as Polo Area, the region around Judumri has suffered repeated Boko Haram attacks in recent months.

The attack on a Maiduguri suburb underscores the lingering security challenges that could escalate if the relative calm in the city engenders complacency. The capital city of Borno is arguably the safest and calmest it has been in the past decade. But the rising refugee population within its precincts poses both a strain on social infrastructure as well as a potential threat to public safety. The huge traffic of refugees also potentially provides a human camouflage that would enable terror cells to infiltrate the city. Securing a sprawling urban space like Maiduguri is a problem that transcends the conventional militarised approach to security especially given the proliferation of slums and low-income neighbourhoods which has heightened the asymmetrical character of the conflict. Despite its relative tranquillity, of Maiduguri is still vulnerable to non-frontal attacks. The threats to Maiduguri require more policing and non-military constabulary operations than further militarisation. It calls for a more deeply entrenched infrastructure of local surveillance and community policing. Any sustainable strategy for public safety in Maiduguri must take these approaches into account.

The CBN has announced the cutting down of Nigeria’s bills on wheat, milk, rice, tomato and sugar in the past five years to $698.6 million, a figure representing almost 50 per cent cut on $1.424 billion incurred on imported foods in 2013. Speaking in Dutse, Jigawa State, Olatunde Akande, Personal Assistant to the CBN Governor, Godwin Emefiele, also said that ₦160 billion had been disbursed to 850,000 smallholders farmers under the CBN Anchors’ Borrowers Scheme since the programme was conceived in November 2017, to assist farmers in the cultivation of rice, cotton, maize, cassava, groundnuts, sorghum, cocoa, palm oil, tomatoes and soybeans.

On the surface, this appears to be good news but at closer inspection, the facts become clearer. Every indication shows what has really happened – the import has simply left the formal sector and ballooned the informal smuggling sector. Over the past few years, the CBN has restricted rice importers from accessing the official FX market and the government increased customs duties on the commodity from 10% to 60% hoping the measures will drive local production. The effect was that import dropped from 1.24 million MT in 2014 to an all-time low of 23,197MT in 2017. However, according to data from the Thai Rice Exporters Association, rice imports from Thailand to the Benin Republic rose from 805,765 MT in 2015, 1.81million MT in 2017 while exports from the same country to Cameroon also rose from 449,297 MT in 2015 to 749,008 MT in 2017. Considering that in the entire West African region, only Nigerians eat parboiled rice in huge volumes and with a population of 180 million people, it does not take a genius to deduce the final destination of the imports.

Nigeria loses $19 billion annually, or about 5 percent of GDP, from the delays, traffic jams, illegal charges and insecurity that are increasingly prevalent at its ports, the Lagos Chamber of Commerce & Industry said in a report this year. The congestion outside and inefficiency within Nigeria’s ports is choking the economy, which vies with South Africa as the continent’s biggest, and causes havoc for businesses that use them to import everything from cars to computers. President Buhari says that the situation is a ‘major concern and that the government will urgently repair roads and build more railways to the ports, food and machinery. 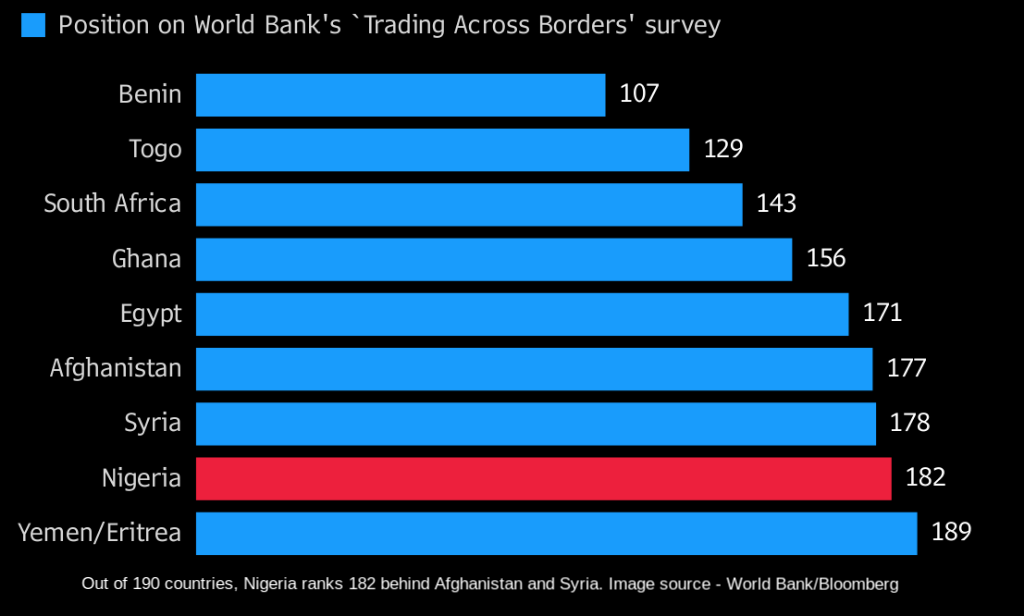 It is no surprise that many who seek to trade in West Africa prefer ports in Togo, Ghana and Benin Republic when goods can be cleared in 48 hours in those places whereas it takes weeks in Nigeria, even when the ultimate destination of these trade items are the Nigerian market. Clearly, this government, like many before it, do not have the answers to the issues at the port – in fact, things have worsened to never before seen levels under it. The latest World Bank Trading Across Borders survey, which measures the time and expense involved with importing and exporting goods, ranked Nigeria 182nd out of 190 countries, below the war-torn countries of Syria and Afghanistan. It should be an emergency that we lose 5% of GDP to a fixable problem. The main issue has been a lack of political will and failure to place a priority of the nation’s gateways. Rather than celebrate revenues from the ports and use the port authorities to fight political battles, the government will do well to focus on fixing this problem. We also ask this – will this government wait until the trailers parked on the bridges in Lagos cause them to collapse and cause a loss of lives before it acts?

The estimated monetary loss in Nigeria’s power sector has risen to ₦460.3 billion in 2018 alone. The FMPWH explained that the huge financial loss was due to insufficient gas supply, distribution and transmission infrastructure limitations as well as water reserves issue. It was also gathered from the Nigeria Electricity System Operator that power generation wobbled persistently, as figures from the NESO showed that it fluctuated between 2,500 megawatts and 3,000MW for the most part of October and November 2018. It, however, dropped to as low as 1,927.9MW on October 29, 2018, while the data from the System Operator put the country’s power generation at 3,437.1MW on November 8, 2018. The SO said peak power generation attained on November 8, 2018, was 4,964MW.

The power sector’s macro performance has been abysmal. Low load demand by power distribution companies and gas shortages are key problems inhibiting the constant generation of over 3,500 megawatts of electricity, despite current generation of about 5,000 megawatts (a wastage of over 30% generated power). Repeated grid collapses and the continued failure of the transmission system to evacuate generated power is a negative for the real sector especially the manufacturing sector which depends largely on good power supply to operate. With little policy drive aimed at the big outstanding issues in the industry, it appears that the FMPWH has thrown its hands up in the air and relegated itself to an explanatory role in the sector, as opposed to actually tackling and solving the problems.

MTN warms up for showdown with the banks

The MTN Group plans to apply for payment banking license in Nigeria and launch a Mobile Money service in the country by the second quarter of 2019, according to Rob Shuter, the company’s CEO. This announcement comes a month after the FG announced it would allow telecom companies to provide banking services, in the hope of giving millions of Nigerians without bank accounts access to mobile money services.

The announcement is a positive for the Nigerian economy as it substantiates previous comments by MTN that it has no plans to exit Nigeria despite its spat with the CBN over alleged illegal fund repatriation, and this ties into MTN’s strategy to become the biggest provider of mobile financial services in Africa. The telecoms-led drive to provide mobile money services will introduce a new interesting chapter in Nigeria’s financial services sector. With voice revenues shrinking and data revenues growing much slower than hoped for, it is imperative for the telcos to pivot into this space where their competitive advantages can deliver cheaper banking services to Nigerians. Nigerian banks and fintech either have to evolve or face an even higher casualty rate. We hope that the CBN will hold firm and not succumb to the already rising voices playing the patriotism card to cause a rollback of the PSB policy that seeks to open this space.

This site uses Akismet to reduce spam. Learn how your comment data is processed.

The Agenda Online Newspaper serves you latest news on Nigerian Politics, Business, Sports, Entertainment & Life Style, Features, informed Analysis and Opinions. Always stay connected with us for latest breaking news and videos on happenings in Nigeria, Africa and across the world.
Contact us: agendanewseditor@gmail.com