In a week where Nigeria’s government outmanoeuvred trade unions but inevitably booted the ball up the pitch, questions still arose about its budget, and investment climate. Meanwhile, one of the major sources of funding becomes an issue for contention, while security dominates the discussions next door, amid concerns that Nigeria may be inadvertently breeding a militia.

FG tactical manoeuvre does not solve the wage problem

Labour unions called off a planned nationwide strike after a new national minimum wage of ₦30,000 ($83.33) was agreed by Nigeria’s government late on Monday night. The strike was scheduled to commence on Tuesday, despite a court order for the unions to desist. The strike was called off after the labour leaders agreed on a national minimum wage of ₦30,000. President Buhari reportedly endorsed the ₦30,000 wage on Tuesday while receiving the report of the Tripartite Committee on the Review of National Minimum Wage at the Presidential Villa, Abuja. However, a presidential source told Premium Times newspaper on Wednesday that the President did not endorse the amount, but merely expressed his commitment to ensuring the implementation of a new National Minimum Wage which is currently at ₦18,000. The government had initially offered ₦24,000 to the unions, an offer which the unions rejected.

The key point to note is that the Federal Government has been unable to fund salary payments at the ₦18,000/month level from its revenues, and most states need to be bailed out periodically at that amount. An analysis by BusinessDay Newspaper projected that an acceptance of ₦30,000 minimum wage (a 66% rise) by President Buhari will cost the federal government an additional ₦1.25 trillion annually, a move which renders the proposed 2019 budget obsolete, and plunges the country deeper into the debt conundrum. In a country like Nigeria with wildly varying costs of living, the minimum wage should be determined at sub-national levels. Each state should compete for talent and pay what they can afford. A second view is the divergence of remuneration from actual cost of living in Nigeria. Even at ₦30,000 ($83.33) per month, the wages for the Nigerian worker still hovers around the poverty line. Then there is the issue of negotiations. This would have been a perfect opportunity to negotiate a removal of petrol subsidies in exchange for the upward revision of the minimum wage, but clearly the government was unwilling to do so because of the potential political consequences so close to elections. Through a slight of hand, the FG has kicked the issue up the pitch, but it remains to be seen how far the ball went. At some point the country will have to stop procrastinating and face up to the real issues.

Amid global bears, we stand out

The CBN last Friday announced that foreign investment in Nigeria had fallen sharply from a year ago as FDI slumped to ₦379.84 billion ($1.2 billion) in the first half of the year from ₦532.63 billion ($1.7 billion) a year earlier, a 30 percent drop. While the regulator put a brave face on it by saying that the outlook for the Nigerian economy in the second half was “optimistic” given increase in global oil prices and production, it however added that rising foreign debt and uncertainty surrounding the 2019 general election was a drawback.

On the back of Donald Trump’s tax cuts and the increase in US rates, FDI has turned to safer developed markets globally, hence declining over the last three years in emerging markets. However, the rate of drop for the rest of Africa according to ATKearney was only 2%, dropping from $50 billion to $49 billion in 2017. This is why the fact of the drop is not the story – it is the 30% rate drop that indicates how badly Nigeria is performing. This shows a failure of the overall foreign investment seeking strategy which has focused on short term portfolio flows to plug an FX demand gap. Portfolio flows that are now reversing partly due to the US interest rate rise and partly due to turbulence at home Ala MTN and the upcoming elections. Nigeria’s perennial fixation with short-term praise at the expense of long term development, is showing up here.

Shaky foundations for the next budget(s)

President Buhari has sent the 2019-2021 Medium Term Expenditure Framework and Fiscal Strategy Paper to the Senate for consideration and approval. At a public consultation last week in Abuja, budget minister, Udo Udoma and the DG of the Budget Office, Ben Akabueze, had explained that the FG would reduce the 2019 budget from ₦9.1 trillion this year to 48.6 trillion in 2019. The key parameters of the 2019 budget are premised on an oil production volume of 2.3 million barrels per day at $60 per barrel, an exchange rate of ₦305 per dollar, inflation rate of 9.98% and a nominal GDP rate of 3.0%.

Of all the numbers in this MTEF document, the only one that is reflective of reality is the price of oil, a factor outside of the control of Nigeria’s government. Every other item, well within the FG’s control like daily production, exchange rate, inflation and GDP growth, are divorced from reality. This is, once again, proof that our budgeting process is essentially not grounded in reality. The revenue performance over the last three years provides an indication of how this will turnout – a huge budget which will inevitably underperform, with the only real hope being an upswing in crude oil prices. It is perhaps saddest that, at this point in Nigeria’s development, we are still dependent on unpredictable and uncontrollable oil prices to this degree.

The books need to be looked at

The Senate has voted to probe the Nigerian National Petroleum Corporation’s alleged withdrawal of $1.05 billion (₦378 billion) from gas company, Nigeria LNG. Premium Times had reported on Monday that the NNPC had used proceeds from NLNG – a venture between the state oil firm, Royal Dutch Shell, Total and ENI – to fund purchases of, and subsidies for, fuel during a shortage in early 2018. This is coming after the Senate had set up an ad hoc committee chaired by the Majority Leader, Senator Ahmad Lawan, to investigate an alleged $3.5 billion (₦1.26 trillion) account kept by the NNPC for petrol subsidy payment. NNPC has yet to comment on the story.

The Senate is absolutely right to carry out this probe. Subsidy payments should have gone through appropriation, and all revenues that accrue to the NNPC, even through dividends received, are meant to go into the Federation Account, from which it should follow the legal allocation formula between the FG, States and LGs. This has not been followed in this case and the Buhari led government has questions to answer.

103 former members of the youth vigilante force, the Civilian JTF, who supported the military to fight Boko Haram in Borno State, have been recruited into the Nigerian army. The new recruits are the latest in a series of batches that have so far been absorbed into the Nigeria army and other security agencies and were showered with gift items, including plots of land and cash, by the Borno government. So far, over 400 former members of the Civilian-JTF have been enlisted into the army. Meanwhile, more than 10 soldiers are missing following an attack on a military base in Kukawa, Borno state. The attack occurred Monday evening when trucks loaded with insurgents moved into Kukawa, attacking a market and dislodging the troops.

Concerns have been raised in the past about the propriety of implicitly positioning the CJTF as a pathway to the Nigerian Army and other armed services. The latest round of recruitments is certain to resurrect such concerns. Apart from the potential violation of Section 217 of the Constitution which stipulates that “the composition of the officer corps and the other ranks of the armed forces of the federation shall reflect the federal character of Nigeria,” there are concerns as to the extent of the due diligence conducted preparatory to these recruitments. Members of the CJTF have been accused of violent crimes ranging from armed robbery to murder to intimidation and sexual assault. There are doubts regarding how fastidious the military has been in sifting out criminal elements in the CJTF. Furthermore, the selection of a few members of the CJTF could create problems of reintegration and readjustment of the remaining irregular combatants if enlistment in the military is perceived as a reward for service among the vigilantes. In the post-conflict phase, the challenge of managing tens of thousands of CJTF veterans will be compounded by a sense that only a few of them have been handsomely and adequately transitioned into the armed forces. This could create discontent and disillusionment among the rest of the CJTF combatants and therefore a threat to peace in the region. As more parts of Borno enter a post-conflict phase, on paper at least, the question of what to do with the CJTF will assume greater import.

No country for the young

At least 79 students and three others, including the principal of the Presbyterian Secondary School, in Bamenda, the capital of the North-West region of Cameroon, were kidnapped by unknown gunmen on Sunday. The students, all boys, and a driver were released on Wednesday by their abductors after a massive search operation involving the Cameroonian army was launched. The school’s principal and a teacher are still being held. Before the release, a video of some of the children, believed to have been filmed by one of the kidnappers, was shared on social media, where all the boys were crammed into a tiny room, looking nervous as the person holding the camera orders them to say their names and where they are from. They also repeat the phrase: “I was taken from school last night by the Amba boys, I don’t know where I am.” Amba is short for Ambazonia, the name of the new country that the separatists want to create. Though, no group has said it carried out the kidnapping, the regional governor Adolphe Lele l’Afrique blamed separatist militias for the kidnapping while the militias, who have been demanding the independence of the two English-speaking regions, have called for a school boycott. 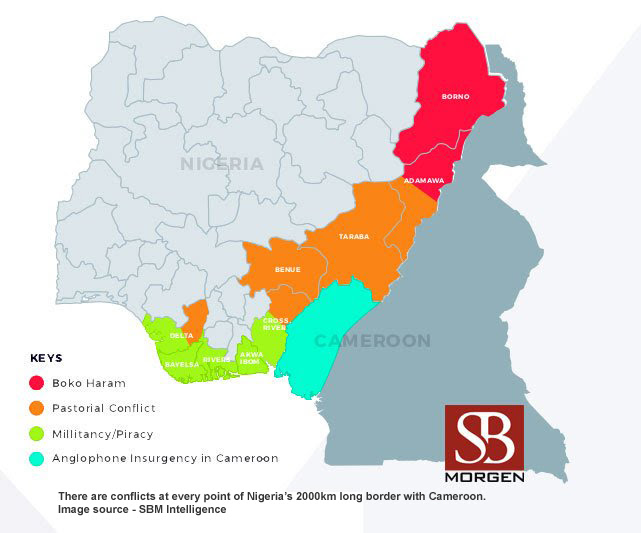 Assuming this abduction was carried out by Anglophone Cameroonian rebels and was not a false flag operation by Cameroonian government agents or their proxies, it would represent yet another milestone in the escalation of the conflict that is threatening to sunder Cameroon. With both sides apparently unwilling to cease hostilities, there seems to be very little room for a peaceful resolution of the conflict. The Biya regime’s unwillingness to countenance the right of Anglophones to peaceful protest as well as the broader ranging suppression of civil liberties, have created a sense of inevitability about a civil war. An all-out insurgency in the anglophone regions of Cameroon would impact her western neighbour, Nigeria, which is grappling with her own insurrectionary challenge in the form of Jihadist elements. It would also create a transnational zone of lawlessness traversing both countries that could potentially enable armed non-state actors in Nigeria and Cameroon to collaborate or at the very least to interact in ways that strengthen their forces. The Cameroonian government could offer some concessions on language rights to the dissidents as a show of good faith and as a measure to de-escalate the tension.  The re-election of President Paul Biya for a seventh term in office suggests that this is unlikely to happen.

This site uses Akismet to reduce spam. Learn how your comment data is processed.

University Lecturer Murdered In His House

The Agenda Online Newspaper serves you latest news on Nigerian Politics, Business, Sports, Entertainment & Life Style, Features, informed Analysis and Opinions. Always stay connected with us for latest breaking news and videos on happenings in Nigeria, Africa and across the world.
Contact us: agendanewseditor@gmail.com